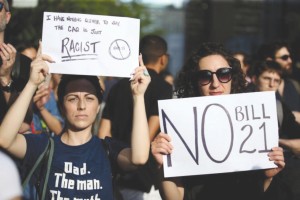 The Charter guarantees the rights of individuals by enshrining those rights, and certain limits on them, in the highest law of the land. According to The Canadian Encyclopedia, since its enactment in 1982, the Charter has created a social and legal revolution in Canada, expanding the rights of minorities, transforming the nature of criminal investigations and prosecutions, and subjecting the will of Parliament and the legislatures to judicial scrutiny — an ongoing source of controversy. The Charter protects Canadians against the state, and protects minorities against parliamentary majorities.

This past June, Quebec’s government passed a ban on some public servants wearing religious symbols, enshrining into law a measure decried by opposition parties, minority groups and human-rights observers as an affront to personal liberty. Bill 21 bans teachers, police, government lawyers and others in positions of authority from wearing religious symbols such as Muslim head coverings and Sikh turbans.

According to the Canadian Humans Rights Commission, hate crimes targeting the Muslim population accounted for 17% of all hate crimes in Canada in 2017 and 25% of discrimination complaints received by this Commission are related to “race, colour, national or ethnic origin and/or religion”.

Helmut Oberlander is a Canadian citizen that was allegedly involved in war crimes during the Second World War. Born in 1924 in Ukraine, Oberlander became a German citizen and applied with his wife to enter Canada in 1952. He was admitted as a permanent resident two years later and obtained Canadian citizenship in 1960.

Federal government is stripping 95-year-old Helmut Oberlander of his Canadian citizenship. However, according to his lawyer, he is no longer a German or Ukrainian citizen.

Quebec’s Bill 21 is another chapter in Quebec’s long history of xenophobia and racism perhaps best chronicled by one of Canada’s greatest writers, Mordecai Richler in “Oh Canada, O Quebec: Requiem for a Divided Country”.  It is a cynical ploy, along with things like language laws and immigrant values tests to get voters to elect francophone nationalists and separatists by painting “Quebecois culture” as under siege from foreigners. While Quebec, more than any other Province is bathed in historical Catholicism (as can be seen in its flag, street names, crucifix in the National Assembly etc.) it can also be fairly described also as perhaps Canada’s most anti-religious province. This has often been used as cover for bigotry.  By banning religious headwear the law has been crafted to appear non-discriminatory until one takes a moment to realise that among the major religions only Christianity doesn’t have such headwear. This is the same province where less than three years ago, an anti-immigrant young man walked into a mosque and shot 25 people, murdering six of them. This is the same province that has recently held an inquiry into the “reasonable accommodation of minorities” (Bouchard-Taylor Commission) due to rampant xenophobia and bigotry making its way into governmental and institutional decisions. This is the same Province where a candidate for Prime Minister in 2019 was told to remove his turban to look more Canadian. Ultimately, this bigotry will do more than simply sully the name of the many brilliant and kind Quebecers who contribute some of the best culture and business that our country has to offer. It will also lead to the cultural and economic decline of Quebec. In the same way as the Quebec separatist fervor of the 1960s and 1970s led to the flight of businesses and Anglophone and other minorities that allowed Toronto to overtake Montreal as Canada’s financial capital, Bill 21 will lead to a brain drain of observant peoples of Jewish, Muslim and Sikh faiths and their allies out of La Belle Provence-weakening it and strengthening the Provinces they emigrate to.

The case of Helmut Oberlander illustrates many of the difficulties of prosecuting war crimes and their perpetrators.  It is further complicated by its historical nature. In Mr. Oberlander’s particular case it appears that he may have been forcibly conscripted as a 17 year-old to serve as an interpreter and an auxiliary with a WWII-era German Death Squad. As with many similar historical cases where first-hand witnesses are no longer available we must be sceptical of the evidence and have to place our faith on the credibility of its sources. In this case the sources are highly reputable (Simon Wiesenthal Centre and German government) and we can be confident of their findings. Furthermore, he has been properly afforded all of the protections of the Canadian legal system. With these two considerations appropriately resolved there should be no doubt that he can be legally deported and should be prosecuted for his war-time activities.  More importantly, the fact of his treatment in spite of the somewhat peripheral role he played in what were undoubtedly war-crimes should stand as a stark reminder of our responsibilities in systems of oppression no matter what our role. It is well established that a claim of simply following orders is not a defence for soldiers accused of war-crimes. This case shows that this principle can and should be applied to those with more indirect roles. This will undoubtedly cause much concern for those in administrative roles in governmental abuses of power (Residential Schools, improper denial of entry to refugees, forced sterilisation, unequal school and other resources to Indigenous Canadians, lack of clean water on Indigenous Reserves etc.) and it should.  If your job requires you to commit crimes against humanity then get another job. If that means that you have to find another job, lose your house, starve or even die than those are unfortunate consequences that may colour what you decide. If you decide, as Mr. Oberlander apparently did, that in order for you to live you must participate in the murder of others than you must be prepared to accept the consequences of that decision. With the deportation of Mr. Oberlander Canada may finally rid itself of its unfortunate reputation as a safe-haven for war criminals. More importantly, with his deportation and the loss of citizenship, family and community that will follow, he and others like him will realise that everyone always has a choice of what to do-even if it is a hard choice, and that every choice has consequences.