We need more discussions on race and racism in Canada. As Canadians, we often embrace a position that separates us from the United States, looking at ourselves as the enlightened neighbours. The truth is that racism does exist in the country, and the sooner we aknowledge it, the sooner we can begin a change. For this edition we spoke to Leigh MacDonald Costa, born to an indigenous family. She shares her personal experience and view on the Indigenous history and discrimination. 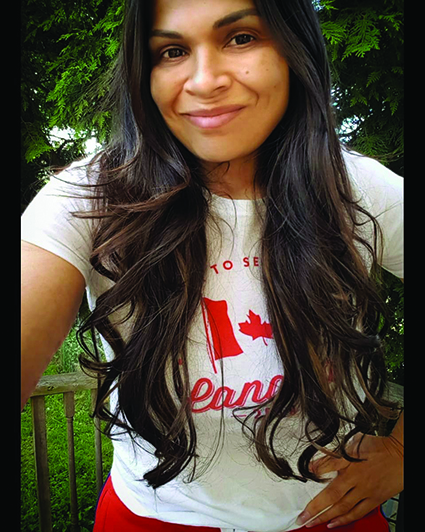 MS: As an indigenous person, have you ever been victim of discrimination or racism in Canada?

Leigh MacDonald Costa: I am Anishinaabe; I am Ojibwe and Algonquin. I am also a Sixties Scoop baby. I was adopted into a Polish/Scottish family as an infant. Although I have been given opportunities I never would have had if I hadn’t been raised in the family I was, I have still experienced racism within my family and my community; both the one I grew up in and the one I was taken from. I was raised with the privileges of my white siblings, cousins and friends but was never seen as white. I am also not seen as Anishinaabe and one of my biggest struggles in life was trying to find where I belonged. I have a Status Card that states I am “an Indian within the meaning of the Indian Act”, and although that Status Card affords me privileges only “Status Indians” are given, being called an “Indian” by my own government has always been a sore point for me. I am not Indian, I am what Anishinaabe means in Ojibwe. I am an original person; I am from the Serpent River First Nation.

MS: What forms of racism have you experienced?

LMC: Growing up in a predominantly “white” suburb of Scarborough meant that I was not exposed to my culture of origin. Others knew that I was “the adopted Indian girl” and there were only 3 Indigenous people in my neighbourhood; me, my older sister (whom my parents also adopted but is not my blood sister) and my best friend who grew up with me and was also adopted by a white family. My parents loved me and my sister without a doubt, but it didn’t mean the rest of the family accepted us. We looked different and we were treated as such. We were also not accepted within the Indigenous community. Because we were not exposed to our culture, we felt like outsiders because we were raised “white”. In high school I passed myself off as “half Asian”. There were such negative stereotypes about being “Indian” that it was shameful, and there was a large Asian population in my high school. Looking back, I practiced “internalized racism” at that time in my life. I don’t recall there being any other Indigenous students at my high school. As an adult I no longer hide but I feel like an outsider in the Indigenous community and I have no traditions or culture to offer my son. That’s difficult for me because he has no connection to the people that he is a direct descendant of. The stereotypes that Indigenous people were labeled is what made me ashamed to explore my heritage. I am grateful that my son has not had the same experiences as me growing up, but I am saddened that the only culture he identifies with is his father’s European heritage.

MS: Did this kind of episodes happen with your familiars as well?

LMC: My sister and best friend experienced the same kind of struggles as I did growing up. None of us were exposed to Indigenous culture until we sought it out as adults. My sister completely embraced “Native” culture when she was in her 30’s and she wasn’t able to accept both her “white” upbringing and Indigenous culture together and has been estranged from my family since the late 90’s. My friend explored her cultural roots and was able to find a good balance between her two worlds for her and her children. I tried to immerse myself in the culture a few times as an adult, but I’ve always come back to where I’m familiar and feel most comfortable. Although I have struggled with my identity my entire life, I think I have grown and accepted the emotional challenges I experienced growing up and they have made me the person I am today. I am proud of my Anishinaabe heritage as well and my Scottish and Polish heritage. I believe it’s easier being accepted as an Indigenous person now than it was when I was younger because the stereotypes are not as strong as they once were and Indigenous people are healing from a place of pride without the shame once attached to being “Native”.

MS: From your point of view, how are indigenous people seen by Canadian society, nowadays? Do you feel like there is still the need to fight against racism?

LMC: I think Indigenous people are seen as victims by Canadian Society. I am part of a class action settlement referred to as the Sixties Scoop. After residential schools were closed in the 60’s Indigenous children were “scooped” from their homes by child welfare workers and placed in non-Indigenous homes. After the loss of culture from residential schools, culture continued to be lost due to placement in predominantly white homes. The $800 million settlement is compensation for harm suffered as a result of the Sixties Scoop. Although financial compensation can make life a bit easier, wouldn’t that $800 million be better spent in the Northern communities where there is no clean running water and the Indigenous people on those reserves live in 3rd world conditions? Trying to right the wrongs of the past does not help what is happening within the Indigenous community right now. I did lose my culture by being adopted by a white family, but I feel like being compensated is merely done to clear the conscience of a government who made us victims in the first place. I don’t feel racism today like I felt it when I was younger. But I don’t know if that has to do with my position in life or more education and acceptance towards Indigenous people in Canada today. The government is definitely putting forth effort to apologize for the past, but I don’t think enough is being done for the issues still happening in Canada regarding the deplorable living conditions in remote northern reserves.

MS: September 30 is considered the “Orange Shirt Day”, raising awareness for an episode of the history when children were taken to residential schools. Today, it is recognized that this policy was wrong. Nevertheless, it has caused great harm. Do you think we still feel the impact of measures like this, in our society?

LMC: The residential school system was the biggest cultural genocide the Indigenous people of this country have endured. The amount of suffering that children and families experienced at the hands of the Canadian government was astronomical and something that will be forever felt. My birth mother was sent to residential school when she was 5 years old. Her experiences there, although she reported no abuse, took her from her family for her entire childhood and she returned to the reserve a stranger in her own community. She was forbidden to speak her language or practice her traditions at residential school; so much culture was lost. That experience left her an outsider and molded her future. She struggled with attachment and this in turn affected all of her relationships as an adult; not only with partners but with her children as well. This in turn has affected her children’s relationships with their children. She was compensated $17,000 by the Canadian government for her troubles. I often wonder what my life would be like if my birth mother and grandmother and great-grandmother weren’t sent to residential school; would I have even been born? Would I have been raised in my culture if I had been? My birth mother passed away in 2012 but lived a hard life full of struggles, hardships and addictions; a direct result of her loss of cultural and familial connection.

MS: What are your thoughts on the recent controversy about Justin Trudeau’s “black face”?

LMC: Without getting into my feelings about politics and merely focusing on the action, those photos were taken 18 years ago and conveniently resurfaced before an election. Do I think his actions 18 years ago speak to how Justin Trudeau views and feels about racialized people today? I do not. I think that people can grow and learn. That doesn’t make what he did okay and that behaviour is hurtful and reprehensible. But when I think about my own growing in the last 18 years towards my Indigenous roots and the internalized racism that I felt when I was younger, I do believe that people can learn from bad choices and can grow from a bad place that they may have been at one time.