Whatever you think of President Donald Trump – hate, admire, despise, loath, respect -, you have to admit that under so much constant pressure and criticism he has held up pretty good. Almost from day one the word impeachment seems to have followed Trump every day in his first administration. He speaks from the heart and has authenticity but is so hated from the left/democrats. 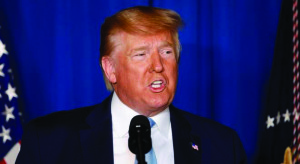 In the corrosive and dangerous Trump presidency, the outrages fly so fast and the chaos mounts so thoroughly that it’s easy to pass off the entire unsettling phenomenon as one more made-for-TV-and—Twitter unreality show. New outrages drive the previous ones from our minds.

In recent days, two questions have dominated the discussion…Did he abuse his presidential power to boost his own political fortunes by pressuring Ukraine to investigate former Vice President Joe Biden and his son Hunter? And is he obstructing justice by not cooperating with an impeachment inquiry?

These two questions have such enormous consequences for the nation that they overshadow other alarming actions and traits. But we must not disregard the many other actions that have led to the hollowing out of our institutions, the cheapening of our spirit, the undermining of our values. Faced with the challenge to unseat, indeed, to repudiate, Trump and his pernicious program for America, it’s essential not to forget the true changes he has done, continues to do and threatens to continue make changes to make America Great Again.

Aside from all the name sawyers, Trump has delivered a stable economy and one that continues to grow each and every day with a strong backing that this president will continue to keep his foot on the gas.

Middle-class Americans incomes have risen quite sharply under Trump than during Barack Obama’s final years. Workers should finally be getting big raises with the unemployment rate down to 3.5%. Unemployment under Trump with all the sectors has gone down, the blacks and Hispanics have had record low unemployment, setting up record breaking statistics under the Trump administration. The economy’s overall performance has changed overwhelmingly since Trump took office, with GDP numbers moving up.

Creating a wall on the southern boarder has made America safer from many illegal residents and has brought the true conversation about immigration to the forefront and has helped stop illegals from entering the US and eventually up to Canada. Despite Trump’s insistence on a wall, the number of illegal border crossings have already been going down.

According to the Centre for Migration Studies, people who enter the country legally and overstay their visas account for about two-thirds of new undocumented immigrants.   Trump has put the focus on illegal immigration, and it has also stopped guns and drugs from entering the US and again ultimately these things make there way up to Canada.

China and North Korea both very important issues that previous presidents were being played, but Donald Trump has stood up to these countries and clearer diplomatic conversations have taken place. In my opinion, these two countries and in particular China are the long-term threats and major competition to the US and to a lesser extent Canada. Donald Trump under his watch, has managed to keep these countries in check and pay their fair share.

This past week, the issues with Iran and the global attention with the killing of Soleimani was something that needed to be done. No other previous US president had the balls to take this guy out, one of the biggest killers this world has seen. This move may have saved thousands of lives worldwide and even though he has taken criticism, this was something that needed to get done.

Trump’s primary achievement has been upending the US drive for world domination. He has tried to establish contacts with so-called rogue states like North Korea. The Democrats have also attempted to connect Trump to Russian at every opportunity in order to discredit or impeach him.

Donald Trump strong pro-Israeli position will be another major reason why he will be re-elected. Trump recognized Jerusalem and the Golan Heights as part of Israel, his strong anti-Semitism has gained him much respect and support globally.

Healthcare under Trump is another positive on the road to re-election. The Obamacare program proved inconsistent and needed to be fixed or replaced. Trump is trying to resolve the issue in his own way – by offering to import drugs from Canada and selling at the best prices.

New medical procedures and an open system would work better for many Americans and will put much less strain on their economy.

A big plus for the Trump re-election bid is weak opponents. Democrats Joe Biden is likely to be Trump’s opponent in the upcoming presidential election, with Bernie Sanders making a very strong push to overtake Biden. Both candidates will not get close to Trump’s re-election bid.

Regardless of what you may think of Donald Trump…his crazy twitters, his off the cuff remarks and yes some of them may be to far off, but his heart is in the right place and he does and says what most folks are thinking.

He will not be FIRED…. he will be REHIRED.

“People from all age spectrums are worried and feeling stressed”