What Toronto needs is a law and order mayor who is able to understand the dynamics of this city and where it is going. We need a mayor that can relate to our diverse communities and infiltrate them and make adjustments or implement strategies that will keep our city safe. 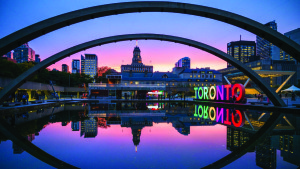 We need a mayor with some balls to take on the gun violence and implement changes in many of our communities. This new mayor needs to be transparent with what he says and implements change, unlike our existing mayor who talks out of one side of his mouth and does something else…in may cases thus far a big fat nothing.

This new mayor needs to be someone that the City of Toronto can relate to immediately and have a comfort level that we feel safe under his watch and know that we have a full trust in him to keep our city safe and mindful of new progressive changes that will better our livability factor here in the big smoke.

It’s time for the City of Toronto to have a law and order mayor and this city is ready for change.

So, the big question is who is that person…

Toronto Police Chief Mark Saunders has had his contract extended by a year and by the time that the contract is done, he will be in an incredible position to start campaigning for Mayor of Toronto. According to many board members and close advisers, Saunders modernization plan of the service and how things are conducted are forward thinking.

Chief Saunders has been an exceptional leader through his term to date, and his renewed appointment signals the board’s commitment to the full implementation of the modernization plan, which upon completion, will cement the Toronto Police Service’s reputation as a world-class leader in progressive community policing and innovative law-enforcement.

The extension of Saunders contract means he will stay in his role until April 30, 2021, after his sixth year in the high-profile position. According to the Toronto police board, this is only the second time in the last 40 years a chief will have served more than one term. Saunders predecessor Bill Blair, now Canada’s Minister of Border Security and Organized Crime Reduction, also had his term extended by five years to a total of 10. When Saunders took over the force, it was facing a ballooning $1 billion budget and warning public trust. Alongside the board, the force has since taken on an ambitious modernization effort aimed at cutting costs and redefining the police force. This last year will also give the Chief a chance to finish a lot of the modernization plan and finish many of the initiatives that he started to help the force face new challenges and keep this city in some sort of containment when he finally leaves the post.

He is a married father of four children, and he is the first black officer to lead the largest police force in Canada. His record of 32 years plus on the force makes him a solid veteran and he has no blemishes on this long outstanding record. Saunders established an open dialogue with the force like no other chief from the past was able to do. When he took over, there was a tremendous amount of tension over the carding issue with visible minorities, especially black youth. He was able to work through these issues and create a trust with the communities that was not there in the past. He promised no immediate changes when he took over but said community trust determines whether police succeed or fail.

He established more public trust among communities and has tried to implement respect and dignity that was not present in the past. In many cases Mayor Tory was not supportive of this chief and thus, he would have his hands tied. John Tory for some reason has always kept Mark Saunders on a short lease and he knows that. My guess is that John Tory always saw him as a possible threat and in typical Tory style kept the chief always under his thumb.

Mark Saunders would make the perfect candidate to take on Mayor John Tory in the next municipal election unless Tory decides not to run as he has indicated on many occasions.

Mayor Saunders understands the city, all the communities and knows how to deal with pressing issues, especially when it comes to law and order and protecting this wonderful city.