Elisabeth Revol, who is recovering in a hospital in France, was climbing the world’s ninth-highest peak when she and her climbing partner, who had no sense of time or space, was snow blind and unable to move unassisted, ran into trouble.

PARIS—The French mountain climber who was rescued from a Himalayan peak where her climbing partner is presumed to have died was still recovering in a French hospital on Thursday.

Elisabeth Revol has returned to France after she was rescued Sunday from Pakistan’s Nanga Parbat mountain — the world’s ninth-highest peak at 8,126 metres (26,660 feet.)

Frederic Champly, the doctor responsible for her treatment at the Sallanches hospital near the Mont Blanc massif, said Revol has serious “grade 3 or 4 frostbites.”

Revol was brought down from the mountain by Polish climbers on a separate expedition to scale the K2 peak. The group volunteered for the rescue, braving high winds and nighttime temperatures of around -35 C to scale the slippery mountain wall and bring her down.

The rescue team was unable to reach Mackiewicz, from Poland, due to poor weather, and made the decision to leave him behind after Revol reported the poor condition he was in when she last saw him.

Revol said Mackiewicz, who turned 43 this month, had frostbitten hands and legs and face, no sense of time or space, was snow blind, and unable to move unassisted.

Speaking at a news conference at the hospital, fellow mountain climber Catherine Destivelle said she has been told Revol is in “good psychological condition.”

“I think she must be happy to be alive and to have survived,” Destivelle said.

The four Polish climbers who rescued her are in Skardu, Pakistan, waiting for the weather to allow them to be flown back to their base on K2, the world’s second-tallest mountain. They are still planning to make the first winter ascent on it. 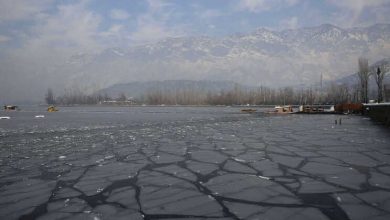