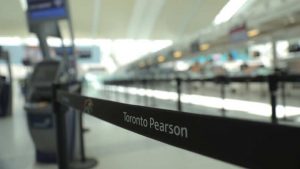 The biggest airport in Canada is eliminating 500 jobs because of the dramatic reduction in demand for air travel due to COVID-19.

The Greater Toronto Airports Authority, which operates Pearson International Airport, says it will not fill 200 current open positions and get rid of an additional 300 positions through voluntary departures and layoffs.

The cuts represent a slash of 27 per cent of the airport operator’s pre-pandemic workforce.

In April, Pearson airport processed 97 per cent fewer passengers than it did in the same month a year earlier. Currently, passenger traffic through Pearson is at the level it was at back in 1996.

Other major airports have already made similar job cuts, including 25 per cent of staff at Vancouver’s main airport and one third of the staff in Calgary.

The staffing move comes after the GTAA already deferred $265 million in planned capital spending this year, including  temporary cuts to salaries for the company’s management and board of directors.

Two of the job cuts will come from the ranks of the GTAA’s executive team, with the departure of its vice-president and chief strategy officer, Kim Stangeby, along with vice-president of customer and terminal services Scott Collier.

“Our leadership team and board of directors have worked concertedly each month to navigate these turbulent times and have put our people first,” CEO Deborah Flint said in a release. “This reduction in force is a difficult but necessary step, and one that we take with great sadness.”

The airport operator says it will work with the Unifor union and Pearson Airport’s firefighter association to implement the changes while respecting their labour contracts.

Last year, Pearson moved 50 million passengers, but this year the GTAA says the airport is experiencing “significant declines in passengers and flight activity as a result of travel advisories and restrictions by governments, flight and route cancellations, and fleet groundings by air carriers.”

The GTAA says normal flight activity “may not return to pre-COVID-19 levels for at least three to five years, according to certain industry participants.”