Toronto city council approved its $13.5 billion operating budget and its $43.4 billion 10-year capital budget at a special meeting on Wednesday.

For the average homeowner, the property tax increases mean roughly an additional $130 this year. 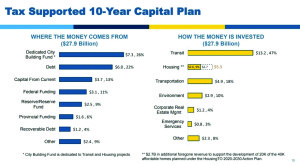 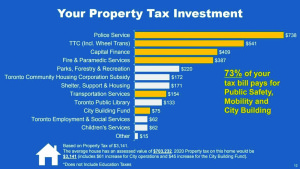 “This is a good, responsible, realistic, forward-looking budget for a very fast growing and very successful city,” Mayor John Tory told reporters on Wednesday (19) at a news conference.

“The budget is balanced in the sense that the revenues meet the expenditures as is required by law. But I believe it is also balanced in the context of balancing all the competing interests and different interests that the city has.”

“I understand that people, in many cases, are finding life stressful on a financial basis today, but together with a modest tax increase, we’re also doing things to try to make their lives more affordable,” Tory said.

“It will cost a lot more in the future if we don’t invest in transit and affordable housing and community safety now.”

The mayor says the operating budget means the city will be able to hire 300 police officers, 121 TTC operators, 62 paramedics and 21 librarians to staff youth hubs.

“These are people who will be visible to the taxpayers, to the people of Toronto every single day, on the street, delivering services to people, driving buses, saving lives, keeping us safe,” Tory said.

Tory also acknowledged that the budget relies upon $77 million from the federal government for refugees and he said he expects Ottawa to “step up again.” City officials have said that refugees are under federal jurisdiction.

“I have been talking to them about that. I’ve had lots of positive feedback. No cheques yet, but I am confident that they will understand that the responsibility is not a one-off deal that happened last year, that we’ll get that funding again,” he said.

As for the capital budget, the city said in a news release on Wednesday (19): “The plan meets the city’s most critical needs for transportation, the environment, real estate and emergency service facilities. The plan invests a total of $13.2 billion in transit, nearly doubling the investment in state-of-good-repair this year.”

Vaccination slots fill up fast as eligibility lowered to 40

Toronto, Peel to close businesses with 5 or more COVID-19 cases linked to the workplace