A Toronto resident is sounding the alarm over pedestrian safety after surveillance camera recorded a woman pushing a stroller as she was nearly struck by a vehicle at an intersection.

Video of the incident, dated 10:24 a.m. Wednesday, was posted to YouTube with the title “Another quiet morning in midtown Toronto,” and had over 3,000 views by Thursday.

It comes just one week after Mayor John Tory launched the next phase of the city’s pedestrian safety plan, dubbed Vision Zero 2.0, with the aim of lowering speed limits and making crossings safer. So far this year, nine pedestrians have been killed on the city’s roads. Last year, 41 were killed.

Ryan Bessey, who posted the video, says occurrences like the one he posted are actually fairly frequent in the Eglinton Avenue E. and Mount Pleasant Road area where he lives. With construction underway for the Eglinton LRT, he says, plenty of vehicle traffic has ended up on side streets.

“For the people that live here, every day you have to put up with all this excess traffic and it’s a little bit dangerous at times. I always use extra caution,” he said.

“The cars are really rushing and barely stopping.”

“It was a near-miss,” he said of the incident captured on video.

In it, a woman pushing a stroller is seen walking toward an intersection. She enters the intersection and takes several steps into it when a vehicle approaches, nearly hitting her. As the car rolls through, the woman is seen taking a few steps toward it before confronting the driver. It’s not clear if the vehicle came to a full stop before entering the intersection.

“F–k you,” the woman is heard yelling, stopping in front of the car. “Get the f–k out of your car,” she tells the driver.

“There’s a child in there,” she yells, pointing to the stroller. “There’s a stop sign!”

The woman is then seen reaching into her pocket and pulls out what appears to be a cellphone as the car starts up again, seemingly manoeuvring to get around her.

“Are you f–king kidding me right now?” she yells, jumping onto the hood of the car as the driver tries to get away, honking.

The car continues, with the woman still on its hood. As it disappears off camera, another car passes by the stroller — still sitting in the middle of the road.

A moment later, the woman is seen walking back toward to stroller before heading to the other side of the intersection.

“It doesn’t surprise me… This particular neighbourhood, Soudan and Foreman, really is a bit of a victim of what’s happening across Eglinton and the Metrolinx work building the [Eglinton] Crosstown,” she said, adding vehicles have been re-routing through the area for months.

In addition to increased vehicle traffic, she says, speed and rolling stops are also a problem.

As soon as she saw the video, Robinson says she called Toronto police’s 53 Division, which sent officers to the area and committed to stepping up enforcement in the area. 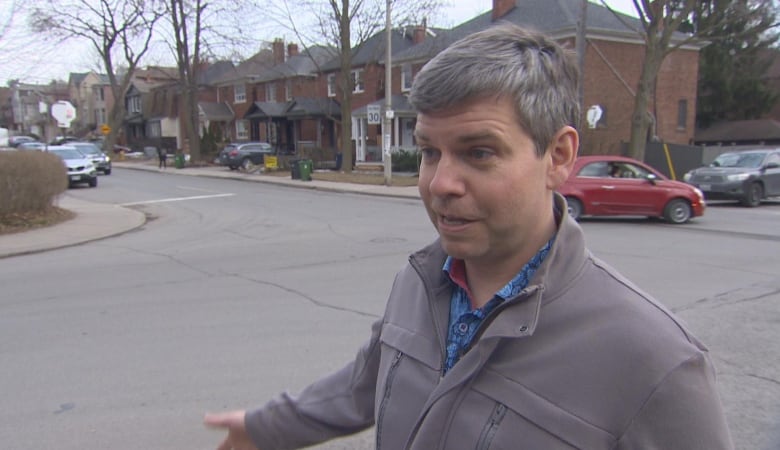 Ryan Bessey, who posted the video, says occurrences like it are actually fairly frequent in the Eglinton Avenue East and Mount Pleasant Road area where he lives. With construction underway for the Eglinton LRT, he says, plenty of vehicle traffic has ended up on side streets (Yanjun Li/CBC)

For their part, Toronto police say they are aware of the video but  are not currently investigating, saying no one has yet come forward with a complaint.

Const. Katrina Arrogante tells CBC News neither the woman nor anyone in the area has contacted them and they don’t yet have any license plate information.

The Vision Zero 2.0 plan follows a decade-long trend towards rising numbers of traffic-related deaths on Toronto’s roads, according to police data.

Pedestrians are the group most often impacted, with more than 330 people killed since 2008 — making up nearly 60 per cent of the overall number of dead.