A pileup involving more than 20 vehicles has prompted Ontario Provincial Police to close the westbound lanes of Highway 401 in Milton, Ont.

Sgt. Kerry Schmidt, spokesperson for the OPP’s highway safety division, said the massive multi-vehicle collision occurred on the 401 west of Highway 25 in Milton.

“We’ve got at least 15 passenger vehicles, maybe seven more transport trucks, and we’ve got about 10 kilometres of backed up traffic,” Schmidt said on Wednesday.

“This is going to be a major delay, a major cleanup.”

All westbound lanes of Highway 401 in the area are closed, but tow trucks are beginning to straighten out and move vehicles. The collision occurred west of the Kelso Conservation Area. Debris is still on the highway.

No one was seriously injured in the sprawling crash. 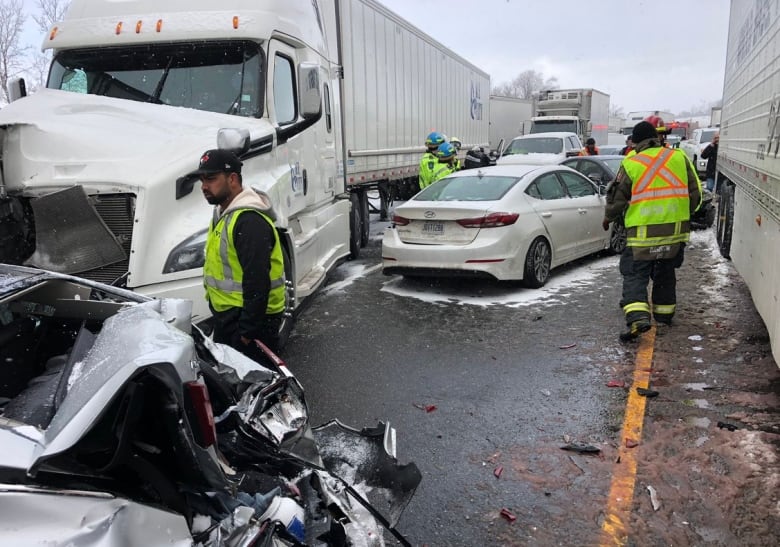 Emergency crews, including paramedics and firefighters, are still on the scene. Paramedics were treating people outside their vehicles.

“It just keeps going on and on and on. Unfortunately everyone’s going to have to wait and be patient,” he said.

‘It’s certainly a bad day for a lot of folks.”

He said transport trucks jack-knifed at the start of the pileup.

The OPP, with the help of Halton Regional Police, are investigating the cause of the pileup. Weather may have been a factor because the roads are slippery, Schmidt said.

Motorists are urged to avoid the area. The pileup is causing major traffic delays.

“We are assisting with traffic once it gets off the highway,” Const. Ryan Anderson, spokesperson for Halton police, told CBC Toronto.

“The drivers are flooding the roads of Milton,” he added.

Halton police said Highway 401 is closed westbound from James Snow Parkway to Guelph Line. Westbound traffic is being diverted to exit on Regional Road 25. Traffic will then be directed to take 5 Sideroad to Guelph Line.

Toronto residents make over 32,000 reservations at city’s outdoor ice rinks in less than a week