Ontario reported 413 new cases of COVID-19 on Thursday and says its network of labs processed 10,506 tests for the novel coronavirus yesterday — considerably fewer than the 16,000 per day target.

The updated testing figures comes after three consecutive days of fewer than 10,000 samples processed, with only 5,813 on Victoria Day.

In his daily briefing Thursday, Premier Doug Ford fielded pointed questions around the province’s testing struggles and pledged to improve the system.

“That’s what I want and I’m confident it’s going to happen,” he said. “Believe me, it’s frustrating.”

In addition to expanded testing, Ford also said he wants to introduce more random testing, which he said will give the province a more accurate account of COVID-19’s presence in Ontario. He listed truckers, taxi drivers, auto workers and food supply workers as people in critical industries in need of more thorough testing.

“We can’t just be testing people with symptoms, we have to start going to the broader public,” he said. “How do we know how many asymptomatic people are out there right now?”

Ford did not provide a timeline as to when expanded testing or more random testing will begin.

In the same vein, a spokesperson for the Ministry of Health said this week that the province completed the work of testing all residents and staff of its 630 long-term care homes, resulting in fewer samples being collected on any given day.

Public health experts, however, have cautioned that significantly increasing testing is easier said than done. There is capacity for as many as 19,525 tests to be completed each day in Ontario. The current backlog of tests waiting to be processed is now at 5,051.

The 1.7 per cent increase in additional cases brings the province’s total since the outbreak began in late January to 24,187. Ontario’s growth rate in cases has steadily hovered between 1.5 and 1.9 per cent for 11 of the past 12 days.

The number of new daily cases continues to trend upward. The five-day rolling average — a statistic that helps smooth spikes and dips in data to provide a clearer picture of trends — bottomed out at 328 on May 12, after three weeks of steady decline. It has been rising since then, and currently sits at 410.

Public health units in the Greater Toronto Area continue to account for a considerable majority, 63.6 per cent, of cases.

The province’s official death toll grew by 31 since its last update and is now 1,993. Data from regional public health units, however, puts the COVID-19 death toll as of Wednesday evening at 2,067.

Included in the current figure are the deaths of least 1,564 long-term care residents, according to a tally tabulated by CBC News, accounting for almost 76 per cent of all COVID-19-linked deaths in Ontario. The province has tracked outbreaks in a total of 287 facilities.

The Ministry of Health says nearly 13 per cent of people who have tested positive for the novel coronavirus in Ontario have been hospitalized. The current number of hospitalizations, those being treated in intensive care units and patients requiring a ventilator dropped by seven, five and three, respectively, yesterday. 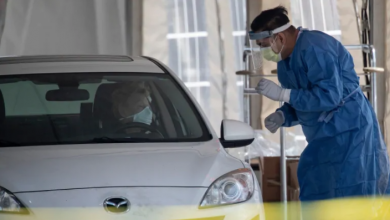