As Toronto’s more than 250,000 Muslims prepare for Ramadan, some community leaders are focused on ensuring the safety of those who will fill mosques across the city during the holy month.

“In light of what’s happening globally, where mosques and synagogues and other places of worship have been attacked, it gives rise to concerns,” said Omar Farouk, president of the International Muslims Organization (IMO).

“We have to look out for each other.”

The non-profit group operates a mosque within its sprawling facility in Rexdale. Farouk and his team recently applied for a grant through the federal government’s Security Infrastructure Program, which provides funding to communities “with a demonstrated history of being victimized by hate-motivated crime.”

Several other mosques in the Toronto area have successfully attained money through the program to enhance security for their congregations.

Farouk said the IMO would use the grant to renovate the mosque’s entrance in preparation for a “lockdown process” and also purchase high resolution security cameras that he hopes will serve as a deterrent for “anyone who may have some evil thoughts.”

Many in the community were shaken by the March 15 mass shooting at mosques in Christchurch, New Zealand, which has thus far left 51 people dead and many more still in hospital with serious injuries, he explained.

“When the New Zealand incident took place, you could see the expression of fear or concern in their faces and in their voices,” Farouk told CBC Toronto.

“There is still concern in the minds of people, even though they may not express it openly. We cannot be complacent, we cannot take things for granted.”

With Ramadan set to begin May 6, IMO is expecting large crowds of people coming to break their fasts and perform evening prayers each night. Community leaders have a responsibility and duty to “give them a sense of security and safety,” Farouk adds.

And it is not just the Muslim community thinking more about how to protect themselves. The Easter Sunday attacks at Christian churches in Sri Lanka that killed 253 people and wounded more than 500 others, and multiple recent shootings at U.S. synagogues have left people of all faiths worried about safety in holy places.

Farouk said that faith communities in Toronto strongly support one another in all kinds of ways, and not only in times of mourning. Those strong bonds were on display Saturday during a Project Ramadan event in Scarborough.

Organized by the Muslim Welfare Centre, Project Ramadan is an annual series of events during which volunteers fill baskets with donated food. Each basket includes enough food to feed the average family of four for about a month, and they are distributed to families in need across the city, regardless of their beliefs.

Saturday’s event was hosted in Scarborough and included hundreds of volunteers from all walks of life and faiths.

Several Muslim men and women who spoke to CBC Toronto said that while violent attacks on places of worship are distressing, they feel a strong sense of safety and community here in the city.

“For the majority, for Canadians, for my neighbours in this community and in this city, I feel like everyone is really embracing and understanding,” said Yousuf Ismail, a Muslim youth organizer. 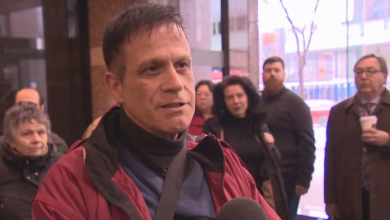