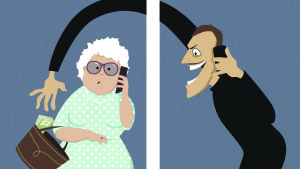 Milénio Stadium: What kind of events are happening during this month to prevent fraud?

Officers: During March everyone is out there putting their different programs that they have to combat fraud. The most important thing is getting information out there about what frauds and scams are happening in everybody’s areas, so they can hopefully prevent themselves from becoming a victim.

MS: You went to St. Fidelis Catholic School for a special intervention. What happened and how was the feedback from students?

Officers: It was on March 9th. We invited the students from grades 7 and 8 to be part of a presentation that we were conducting. And they also had the opportunity to bring any old cellphones, old hard drives, computers and so, to be shredded. That was a partnership with the Electronic Recycling Association, so it means if you brought in your old hard drives they got shredded. There was a giant machine there that you literally drop things in it. It had giant gears just crushing things up. So all that information is permanently gone. And then, the rest of it got recycled or, depending on how old they were, they could be recycled into different shelters and organizations to benefit our community.

MS: What feedback did you have from the students?

Officers: It was actually our first opportunity to get in with some younger people, which we thought was very important. We’re talking about data security. Kids have their phones in their hands at such a young age, and it’s such a part of their life that they should definitely know the risks of fraud and online safety. The kids were great, we talked about social media, being safe online. Because sometimes kids just think “well, if I delete the picture from my phone it’s gone”, but it is still just sitting in the background. There’s a ton of free apps that can actually bring it back. I’ve done the same thing because I’ve accidentally deleted something I needed to find. The partnership with the Electronic Recycling Association was fantastic, really engaging with the kids and we were able to have volunteers coming up and the kids actually got to shred some of the devices.

MS: What types of frauds are most common in Canada and how should we deal with them?

Officers: We have tons of frauds and scams going on. Something that we would wanted to touch on, just because of the COVID-19 happening, we want to make people aware that, when going online, different websites may not be legitimate. Be aware that some people are unfortunately taking advantage of this type of situation, so make sure that you’re going to the proper secure sites. In terms of frauds, in general, I’m sure everybody gets on their cell phones those text messages asking you to click emails, unsolicited emails asking you to click on different links and such. If for some reason you get in contact with the company, don’t give away any information because they’re looking for your personal information. And these scammers on the other line, they create that sense of urgency and they’re really good at what they do. They can suck people in and unfortunately people become victims, so if you do answer your phone, just hang up. Don’t click 1 to speak to an operator, don’t say yes to speak with any agent, just hang up. And another thing to consider is called spoofing. It means that the number that comes up on your screen might not necessarily be the number that is calling, because they can change that information.

MS: What are the risks of keeping information in our old devices?

Officers: It can be very dangerous, and this is what we tried to bring awareness to at this school. The information on your devices can potentially get into the wrong hands. And that’s personal information that will be shared and it could put someone in risk as being a victim of identity theft. Sometimes we have these old devices, we sell them as well so you have to be aware. So, if something is going to be shredded, that way we make sure it isn’t getting into anybody’s hands at all.

MS: In case anyone is interested in doing the same, shredding their electronics, how can they do it?

Officers: If I have old devices you can visit the Electronic Recycling Association. I believe if you have 10 or more items they will come and pick those items up, otherwise they have a drop off address, at 489 Brimley Rd #15, in Scarborough.