An Oakville, Ont., resident on a flight to Victoria for a funeral says he’s frustrated Air Canada didn’t clearly give passengers their options while the plane was stuck on the tarmac at Toronto’s airport for almost seven hours Tuesday night.

“The underlying thing is there was just really no communication,” said David Kitchen. 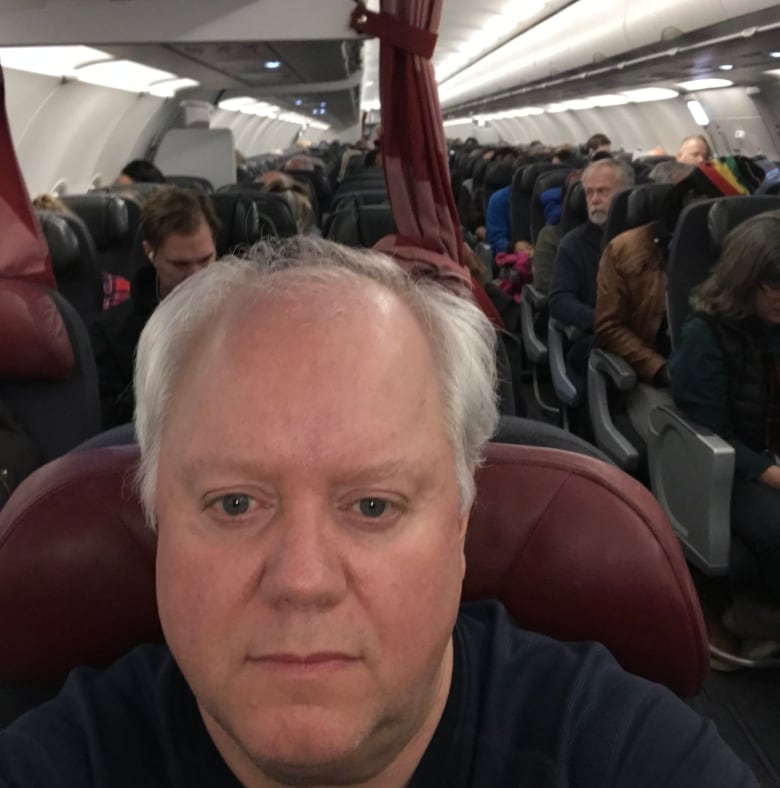 David Kitchen was among passengers stuck in the plane on the tarmac in Toronto for more than six hours Tuesday night, waiting to fly to Victoria. (Submitted by David Kitchen)

The plane Kitchen was on couldn’t take off due to icy conditions, and later had to be refuelled because it waited so long, Air Canada says.

After four hours, Kitchen said, passengers were given the chance to get off the plane. But the crew did not provide information about their options — for example, if they would be rebooked or receive a refund — and few people got off, he said.

“Nothing was really explained properly or thoroughly.

“People were definitely wanting to get off the plane, but they couldn’t make a decision because they had no information from Air Canada about what was going on.”

Kitchen said the captain made announcements during the wait,  but there were long gaps between communication and they only got “little snippets” of information.

Kitchen also said Air Canada did not serve any meals until the plane departed, although passengers received a bag of nuts and some water after a few hours on the ground.

With the funeral Thursday, Kitchen said he had no choice but to stay on the plane and hope it would eventually take off.

“We were all exhausted, obviously. It was just too much, really.”

High winds and freezing rain iced over the entire airport apron, and caused late departures and cancellations, said an Air Canada spokesperson in an email.

Air Canada said announcements were made throughout the wait, and the crew did provide water and snacks several times.

“This flight offers a buy-on board service, so it was not possible to provide everyone a meal,” Air Canada spokesperson Peter Fitzpatrick said in an email.

“Also, after returning to the gate, the bridge was attached and customers could deplane, although few did.” 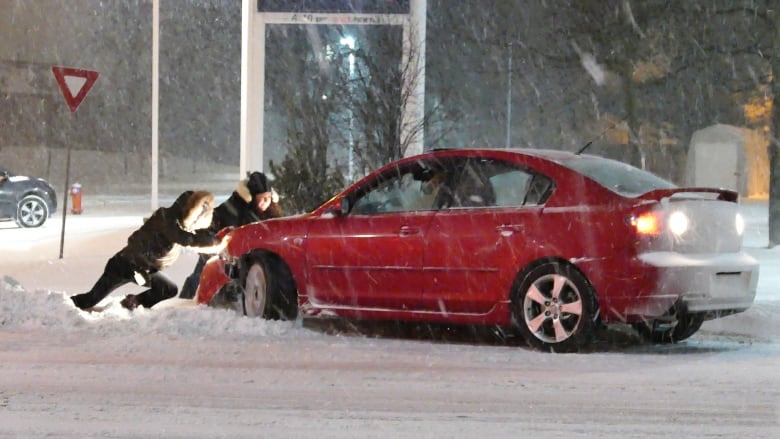 Toronto was hit with a hefty winter storm on Tuesday. Drivers struggled to cope with snowy conditions and there were multiple airport cancellations. (Mehrdad Nazarahari/CBC)

Limit of 4 hours on the tarmac

According to Canadian standards, airlines should let passengers off the tarmac after 90 minutes, said Gabor Lukacs, founder of advocacy network Air Passenger Rights.

However,  Lukacs said Air Canada changed its terms and conditions last year so it could keep passengers on the tarmac for four hours.

Lukacs said his group launched a complaint against Air Canada with the Canadian Transportation Agency in May.

“Our position is that keeping people on the tarmac for three or four hours is unreasonable and unlawful,” he said, calling it a “form of forcible confinement.”

The airline has not yet said whether it will offer compensation to customers, including Kitchen. With so many flights cancelled or delayed on Tuesday, Air Canada said its priority has been moving affected customers and restoring its schedule.

It is “just beginning to assess the storm’s impact” and will “respond appropriately in due course,” the spokesperson said.