Hundreds have been evacuated following a fire inside terminal one at Toronto’s Pearson International Airport, according to Peel police.

Following the incident, all flights to the U.S. scheduled to depart from terminal one have been cancelled, according to the Greater Toronto Airports Authority (GTAA). 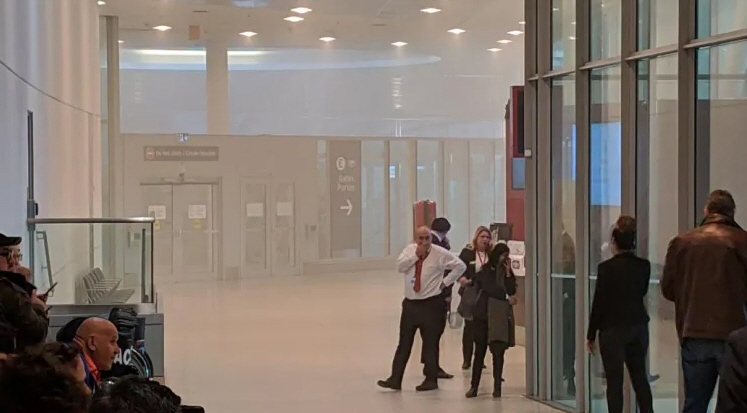 International aircraft at terminal one are also currently holding at their gates.

Police say the fire has been extinguished, but a significant amount of water and smoke still remain in the area.

Emergency responders are currently on scene.

Police say a few patients have been treated by paramedics for smoke-related injuries, but no major injuries were reported.

A passenger in the terminal at the time of the incident, who was later evacuated, said she saw smoke coming out of a display stand from a duty-free shop.

Police are encouraging passengers to check their flight status before arriving, especially those scheduled to travel to the U.S. Sunday evening or Monday.

‘Everyone was kind of in awe and shock’

Kendall Wilson said she had already been processed by security for her 8 p.m. flight to Phoenix when everyone around her froze, noticing smoke in the air around them.

That’s when Wilson noticed smoke coming out of a display stand in a nearby shop.

She said she saw customer service representatives at the shop, walking around frantically

“Everyone was kind of in awe and shock,” Wilson said, adding she got separated from her mother who was also flying to Phoenix with her.

Luckily, Wilson was able to FaceTime her to see that she was okay.

“Smoke was coming quite steadily, it was quite shocking.