The Toronto Santa Claus Parade has evolved over its 115 years of existence.  It was initially a much smaller scaled parade taking place directly in the city centre, with just a single float.  Its origins can be attributed to the Eaton family as a promotional walk organized by Eaton’s in 1904 when Santa walked from Union Station to the present day Eaton Centre location.  The official start year of the parade was in 1905. 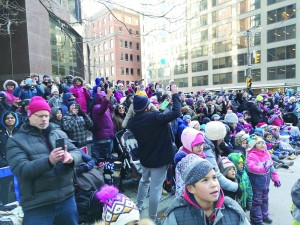 The parade naturally grew both in size and attracted larger and larger crowds.  It was such a special project for the Eaton family that one year Mr. Eaton arranged for real reindeer from Labrador to come guide Santa through the streets of Toronto. The Santa Claus Parade has been spreading the holiday cheer for so many years with its route start at Christie and Bloor.  However, this year’s parade took a different route.  Nonetheless, the Santa Navigator, Santa’s very own GPS, was on point as the jolly one didn’t get lost.

On the morning of Sunday, November 16, 2019, families made their way to their usual set up location, only to be greeted without the usual buzz and hustle of what the day’s celebration typically brings.  They wondered why they scored such an optimal spot and wondered why it wasn’t as busy as the past years. The excited children and their families quickly realized the parade route had changed but were in time to head east. The route that is imprinted in the minds of many Torontonians rolls from Christie Pits along Bloor Street until Queen’s Park, where it then loops around Crescent and down University to Wellington, south on Yonge Street to its final destination to St. Lawrence Market.   The sole change was at its location point and its east direction along Bloor, where at Queen’s Park the trusted route was back on.  Marco who has attended as a child and now as a father shared; “for as long as I can remember my family has always walked south to Bloor from our family home on Markham Street to set up a warm cozy spot on the corner.  The children follow later with my parents and in-laws.  It’s the only route we have ever known.”  He went on to express that his community echoed the same sentiment and were saddened that, “the elderly residents of Seaton Village and other neighbouring neighbourhoods had to return home because they just couldn’t make the trek east.”

It is a fair assessment to say many were very disappointed to learn that the parade route changed.  Most who knew about the route change were under the impression that this is solely a temporary change during the bicycle lane construction currently underway.  However, The Toronto Santa Claus Parade organization has confirmed that this change is permanent.  Yet, just how permanent will this route be?  Through a telephone conversation with Milénio Stadium, a Santa Claus parade representative shared that it is in fact a permanent change not only because of the bicycle lane installments on Bloor, but “city guidelines do not permit for the parade to go through in the future as the width requirements of the road will not allot space for emergency vehicles to make their way through should an emergency arise given the bicycle lanes now take up a significant part of the street”.

Again, what does that mean for the future of the parade given that the bicycle lanes are rumoured to eventually be installed east along onto the Danforth?   Specifically, bicycle lanes are slated for Bloor Street between Sherbourne and Parliament Streets for 2019.  Although, it appears that it is not going to be delivered on time as we are approaching the end of the year.  The Santa Claus parade shared that the city has not provided the not-for-profit parade organization with timelines on the project but stated that for now it is the new route and should anything change in the future; the organization will make adjustments accordingly.

A tradition often follows a scheme and for many that is exactly what happened.  They went about their usual steps in coming to the parade.  They didn’t think to check The Santa Claus Parade website and didn’t come across the information online or on television.  The social media community expressed their sadness and helped spread the word that Santa was coming to town but had to make some modifications.  Despite the confusion this past Sunday (17), we can all agree that the tradition of waiting for old St. Nick and all the wonderful floats will be etched in our hearts forever.  One thing is certain, with a touch of the remnants of last week’s snowfall, not so delightful cold temperature and the sight of the old man in the red suit, tells us that winter is the near distance.