A new school year signifies a new beginning, a “do-over.”   That is the hope of all students, parents, teachers, education workers, and all who contribute to the success of our students.  The promise of a “do-over” was almost taken away with a potential looming strike by our province’s public education workers.  The Canadian Union of Public Employees (CUPE), which represents 55.000 education workers in Ontario, custodians, special education assistants, early childhood educators, clerical staff and child and youth workers, had been without a contract since August foreshadowing of imminent labor unrest before the school year even began.  The Ontario teachers’ contract also expired in August but negotiations are currently on hold. 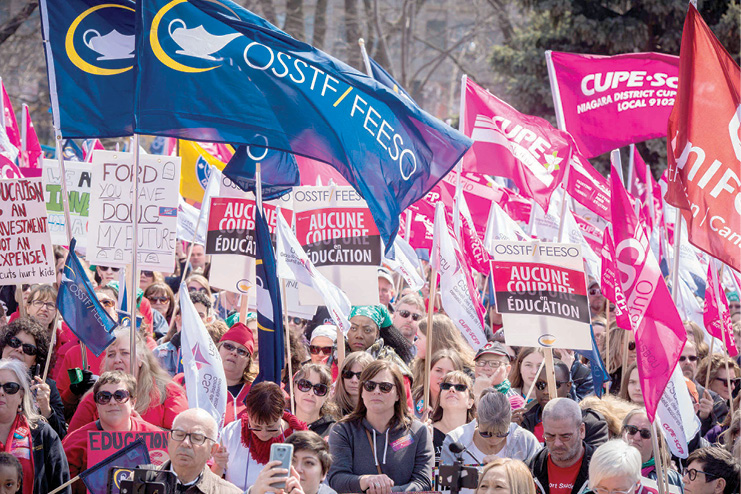 Just two days after CUPE announced that its members were on a sanctioned work- to- rule campaign, it then announced that its members would be ready to head to the picket lines the following school week.    Parents, school boards, and the government did not anticipate such a quick escalation from work-to-rule to a probable strike.  Parents across Ontario waited anxiously as negotiations took place last weekend when only in the nick of time the strike was averted. The escalation, the uncertainty and the short notice of school closures perpetuated fear among young families.

The likeliness of a  strike left parents scrambling for alternative childcare as school boards across the province had made the decision to close if the education workers went on strike because  they felt student safety would be compromised.   Parents were confused because the previous time CUPE’s educational workers went on strike, there were no school closures.  There had only been school closures when teachers were on strike.  The last CUPE strike, parents of students in the special education program, special needs students, were asked to keep their children at home.  Some parents feel that the school boards chose to close this time because they were critiqued for the inequity of asking those students to withdraw from school.

Weekends are when most families spend time together; participate in extra-curricular activities and for the dreaded end of a weekend ritual of lunch prepping for Monday’s school day lunch.  However, in addition to the already existing busyness of family life, parents across the province spent their weekend in panic struggling to make alternative childcare plans.  Some families have the option of dropping off their children with grandparents who are available to pitch in, others with the family’s nanny, and parents who work from home are covered too.  Although those parents were concerned as they would have to divide their time between work and supervising their children, adding to the chaos of running their own businesses and getting their tasks completed.  Furthermore, a strike would have meant that families, who depend on daycares that are housed in schools that do not yet have school aged children, would also be affected.  Daycares’ hours of operation would decrease to allot for principals to open and close school facilities, a job duty of a school custodian. A strike would leave many without childcare as a result, many organizations kicked in by providing rescue childcare options, some come at a cost of $50 per day, which would result in financial hardship for families already struggling.

Although childcare was a big concern, parents and students of secondary schools, in particular those who are in their final year, were also concerned about what that would mean for their future post-secondary studies and their child’s mental health.  A school provides a space for academic achievement, but it also is crucial to the social and mental well-being of students.  There are many casualties when students’ education is put on hold. A strike would greatly impact many families.

Gladly, at the last hour the Ontario government reached a deal with its education workers, staving off a strike. CUPE members negotiated and obtained a moderate wage increase and were able to maintain their existing sick leave plan. The details of the three year agreement remain confidential until the result of the ratification vote.

Parents are relieved that schools remain open, but feel this was just a dress rehearsal for when the teachers sit with the government to negotiate their contract.  A number of parents feel that the education workers rendered a favourable outcome because of the upcoming election.  They suspect that the provincial Progressive Conservative government played nice just to stay out of hot water to help their federal counterparts.  It would also look bad for the government not to agree to moderate wage increases as wages were frozen under the previous agreement and CUPE members do not earn high wages.

Despite the fear, stress and anxiety experienced in many Ontario homes last weekend, parents feel more prepared as they now have alternative childcare in place should a strike arise.  Many parents believe it is very unlikely that teachers will get such a quick and smooth resolution. Nonetheless, let us be hopeful that the Ontario teachers’ contract is resolved without any disruption to our students’ education.  A new academic year promises a “do-over”, parents will be watching closely for school notices in their children’s knapsacks in hopes of news that the government did it over again without hurting its students and keeping students in the classroom.