CreateTO, the city’s real estate arm, is preparing to put forward a second package of Housing Now sites at its March board meeting – a step that comes amid calls for greater density and more affordable units in Mayor John Tory’s expanding affordable housing plan. 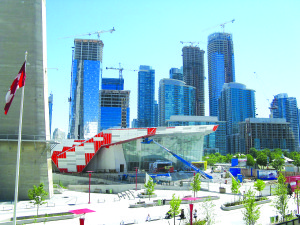 Announced in 2018, Housing Now aims to create mixed-income communities on city-owned land. The first round of 11 sites could create roughly 10,000 new residential units, including more than 3,700 “affordable” rentals set at around 80 percent of Toronto’s average market rent.

“We recognize there has to be a steady supply of this stuff coming forward,” said Brian Johnston, CEO of CreateTO, during an interview with CBC Toronto on Monday (10).

Johnston couldn’t say how many sites will be unveiled, only noting that while his team could potentially “cough up 10” for the next round, around four or five new sites is more realistic, with more rollouts down the line following the board meeting on March 13.

The city’s broader, multi-layered housing plan, which stretches to 2030, aims to create 40,000 more affordable housing units across Toronto. The goal builds on a campaign promise from Tory in 2018 – which breaks down to roughly 3,300 new units needed annually over 12 years.

Hitting that target means the city needs to be more “aggressive,” bringing at least 15 new Housing Now sites on 50 or more acres of land into the mix this year alone, argues housing advocate Mark Richardson.

Richardson is heading up HousingNowTO, a grassroots group of around 20 advocates, city planning watchers and local students who have been keeping tabs on the progress to date.

The group is also calling for more density, and a higher percentage of affordable units, in the 11 sites outlined so far.

According to Richardson, 50 Wilson Heights Blvd. in North York is one instance where the city hit the mark.

As the initiative winds its way through the council process, updates on zoning amendments and draft plans for two of the Housing Now spots – the Wilson site, and 705 Warden Ave. in Scarborough – were on the agenda for Wednesday’s (12) planning and housing committee meeting.

Currently a commuter parking lot for the Wilson subway station, that site was initially slated to have 385 affordable rental units out of a total of 1,150.

The city, the TTC and CreateTO wound up exploring ways to remove an exclusive bus driveway on the west side of the roughly eight-acre site, providing space to add a proposed 350 more units, of which 103 more are affordable – marking a 26-per-cent increase.

That hike “clearly shows” that many of the initial unit targets proposed back in 2018 were “far below the actual housing-opportunities that these sites offered,” wrote Richardson in a recent letter to the planning and housing committee.

He stressed the city’s targets should be used only as a “baseline number, with a city-wide goal to increase the unit-counts and density on all of the proposed sites under this program.”

Put another way, he told CBC Toronto: “We need to fire up the housing creation machine.”

While Wilson could be a success story for greater density and affordable unit creation, Richardson said the Warden site is the opposite: a low-density proposal on around seven acres of land that’s just slightly smaller than the Wilson area.

According to CreateTO, there has, however, been growth there as well; in the zoning bylaw amendment that was on the agenda Wednesday (12), the proposed seven- and eight-storey mixed-use buildings at Warden have increased to nine and 11 storeys, resulting in 520 total units, up from around 450. Around half would be deemed affordable.

The Wilson and Warden sites are also among three properties – including 777 Victoria Park Ave. – which have gone to the request for proposal phase with developers, putting the trio at the closest point toward getting shovels in the ground.

City officials have ‘big job’ ahead

Coun. Ana Bailão, chair of the housing committee, said the city will be looking closely at what proposals come in to make sure the city is ensuring it’s getting the largest amount of affordable housing possible, and said she expects the city will release details on the recommendations and winning bidders “soon.”

“We understand the need, and the urgency,” she said.

As for the expansion efforts, Don Peat, a spokesperson for Tory, said the mayor’s office knows CreateTO is working on the next phase and looks forward to pushing “ahead with that plan in the near future.

“The Mayor was clear at the time Housing Now was launched that this was the beginning of the City’s push to get more affordable housing built and that there would be future phases,” Peat said in a statement.

Johnston said on all the sites, both current and those to come, CreateTO is pushing for more density, despite some concerns from the public and a desire for “proper” density from the city’s planning department.

“There are more people that are saying, ‘These aren’t dense enough. We think you guys can do more,’” he added. “And that has been a surprise to me.”

But Johnston warned the next rounds of sites may be more difficult to address “speedily” from his team, as the size of the project grows. With that in mind, CreateTO is recruiting to bring in enough staff to continue delivering the program.

“We’re obviously very aware we’ve got a big job ahead of us,” Johnston said.