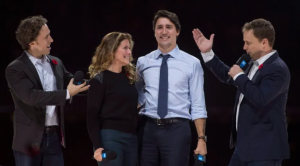 A former chair of the WE Charity board of directors told MPs on the Commons finance committee this afternoon that the board was told that speakers were not being paid for appearing at WE Day events — even though WE later confirmed that its for-profit arm had paid Prime Minister Justin Trudeau’s mother and brother thousands of dollars for speaking at such events.

“The WE Charity board always understood that speakers were not paid by the charity or the related organizations to speak at WE Day. The board made direct inquiries on this issue,” said Michelle Douglas, who worked at WE Charity for 15 years.

WE Charity confirmed earlier this month that Prime Minister Trudeau’s mother Margaret was paid by Me to WE, the charity’s for-profit arm, about $250,000 for speaking at 28 events, while his brother Alexandre spoke at eight events and received about $32,000.

WE Charity founders Craig and Marc Kielburger have since acknowledged that WE Charity did pay some of Margaret’s expenses — about $64,000 worth — but that it had paid none of Alexandre’s.

Asked about these payments today, Douglas said she didn’t “know the precise nature of what they were paid for, but if it was exclusively to speak on the WE Day stage, that would have surprised me.”

The Kielburgers are set to appear before the finance committee later today to answer questions about their controversial partnership with the Liberal government that saw the charity tasked with overseeing a $900 million student grant program.

Douglas said that while she worked at WE for 15 years and still supports WE’s mission to engage youth in charity and development work, she came into conflict with the management of the organization when it began laying off hundreds of staff members at the outset of the pandemic.

“It was our view that you could not fire hundreds of people without very strong, demonstrable evidence, and even then, should explore mitigation efforts to save jobs. Instead, the executive team were dismissing employees with great speed and in large numbers,” she said.

Douglas said that repeated requests by the board of directors to get financial evidence from management to justify the job cuts went unanswered.

That inability to access financial information was one of three factors Douglas said prompted her to leave the organization.

She also said she left because the board of directors was being denied access to WE Charity’s chief financial officer. Meetings with the CFO were set and then cancelled, she said, making it impossible for the board to determine if the job cuts were financially justified.

Douglas also said that in the midst of the job losses and the surging pandemic, Marc Kielburger travelled twice to Kenya without a satisfactory explanation for his travel.

Douglas said she also was troubled by a 2018 Canadaland report chronicling abuse and bullying in the organization, and by subsequent reports of “concerning allegations.”

“So this doesn’t feel very good to me in the sense that I’m troubled if somebody didn’t have a good employee experience, but I personally never saw anything from Marc that directly concerned me,” she said.

Prime Minister Trudeau and Katie Telford, his chief of staff, will appear before the House finance committee on Thursday to answer questions about their role in bringing WE Charity in to run the program.

Last month, Trudeau announced that WE Charity — which has close ties to the Trudeau family — would administer the Canada Student Service Grant, a program to provide eligible students with grants of up to $5,000.

The grants are intended to help students cover the cost of post-secondary education in the fall. The amount of the grant depends on how much time students spend doing volunteer work.

Asked if she thought WE Charity had the capacity to administer the federal student volunteer program, Douglas said it was “impossible” for her to say because she had resigned months before the contract was awarded.

“Insofar as their ability to deliver on that program, I just don’t know,” she said.

The contract awarded to WE Charity was arranged as a contribution agreement between WE and the federal government, and not through a competitive process. It has since been dissolved.

Shortly after it was announced that WE Charity would be running the program, the Liberal government came under fire from opposition parties and some in the charitable sector over the Trudeau family’s relationship with the charity.

Trudeau and his mother, Margaret, have appeared at a number of WE Day events, while Trudeau’s wife, Sophie Grégoire Trudeau, hosts a podcast for the group called “WE Well-being.”

Initially, WE Charity said members of the Trudeau family were not paid for appearing at WE events, although Sophie Grégoire Trudeau had been reimbursed for travel expenses.

Despite WE Charity’s ties to the Trudeau family, Douglas said the board of directors viewed the organization as non-partisan.

“It was always our view, at least in the board of directors, that we were indeed non-partisan, which had the potential of engaging any government, provincial, municipal or federal,” she said.

The deal is being studied by two parliamentary committees and Trudeau and Finance Minister Bill Morneau are both being investigated by Mario Dion, the conflict of interest and ethics commissioner.