Prime Minister Justin Trudeau is touting the benefits of an expanded financial package to help Canadians cope with the impact of COVID-19 — while warning them about a “text scam” that’s trying to exploit the government program.

Holding a news conference at his residence at Rideau Cottage this morning, Trudeau said some people are preying on the vulnerable during the pandemic.

“I’m sorry to say, there appears to be a text scam going around on the new emergency response benefit,” he said. “I want to remind everyone that the government’s website is the best place to find reliable information on everything we’re doing.”

On Wednesday, the federal government announced it had streamlined and expanded the COVID-19 emergency benefits program and said Canadians struggling financially could expect payments within weeks.

The application process is scheduled to open in early April, with individual income support payments amounting to about $2,000 a month expected to flow about 10 days later. The benefits will be available for four months.

Earlier today, Trudeau held a teleconference call with other G20 leaders. He said they agreed to do “whatever it takes” to ensure public health agencies around the world have the resources they need.

The leaders also agreed to continue collaborating on developing a vaccine, identifying treatments and increasing testing.

“COVID-19 is a global crisis and demands a global response. Now, more than ever, we must work with our allies to protect people and the economy,” Trudeau said.

Trudeau described the $107-billion package of measures to help Canadians and businesses through the economic crisis caused by the pandemic, including the new Canada Emergency Response Benefit (CERB), which offers income support for up to 16 weeks to those who lose pay due to COVID-19.

Legislation enacting $52 billion worth of financial aid and another $55 billion in tax deferrals was approved by Parliament Wednesday.

It covers Canadians who lose their jobs, get sick, go under quarantine or have to stay home because of school closures.

The government plans to open applications for the CERB in early April, and payments are expected to flow about 10 days later.

Other measures, like a temporary boost to the Canada Child Benefit, are expected to take until May to reach Canadians’ pockets.

According to Global Affairs Canada (GAC), there are now more than 419,400 Canadians registered as being abroad. Registering is voluntary, so the figure doesn’t give a total snapshot of those actually outside the country.

Diplomatic missions and consulates abroad are taking measures to stop the spread of the virus and protect the safety of staff and visitors, GAC said in a news release. 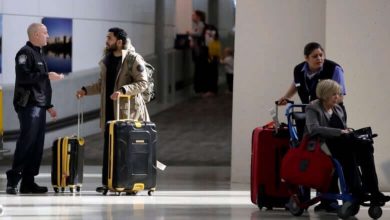 EU removes Canadians from list of approved travellers, because of COVID-19