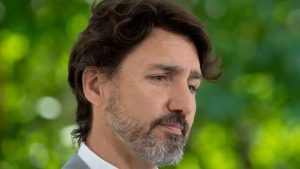 Prime Minister Justin Trudeau apologized today for failing to put some distance between himself and the decision to award the WE Charity a multi-million-dollar contract. (Adrian Wyld/The Canadian Press)

Prime Minister Justin Trudeau said yesterday he was sorry for not recusing himself from cabinet discussions about awarding WE Charity a multi-million dollar contract to administer the summer student grants program. “I made a mistake in not recusing myself. I am sorry,” Trudeau told reporters.

He said he should never have been part of the cabinet talks, given his family’s close personal ties to the charity. The apology comes after CBC News and Canadaland reported that his mother, Margaret, and his brother, Alexandre, were paid in excess of $300,000 by WE and its entities for speaking engagements over the last four years.

Trudeau said he knew his mother and brother were employed as public speakers but he didn’t know just how much his family members were paid by WE.

“I deeply regret that I have brought my mother into this situation. It’s unfair to her, and I should have been thoughtful enough to recuse myself from this situation,” Trudeau said.

Trudeau said the public service first recommended WE as the best pick for the contract, given its nationwide reach and its experience connecting students with volunteer opportunities.

Trudeau said he still should have known that his involvement in talks to award the contract would be problematic, given how closely associated his family is with the organization.

“When it came to this organization and this program, the involvement that I had in the past, and that my family has, should have had me remove myself from these discussions and I’m sorry that I didn’t,” Trudeau said.

He said he regrets that his failure to recuse himself from contract discussions has derailed a program that was set to help thousands of young people find work.

“I’m particularly sorry because not only has it created unnecessary controversy and issues, it also means that young people who are facing a difficult time right now, getting summer jobs, contributing to their communities, are going to have to wait a little longer before getting those opportunities to serve, and that’s frustrating,” he said.