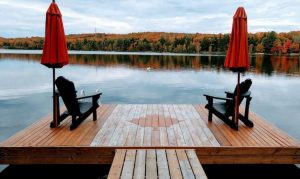 Port Dover is in Norfolk County, where a new bylaw bans cottage owners from using or renting their seasonal properties during the pandemic. The fine for those who are caught can go up to $5,000 per day. The community of Port Dover, Ont., locals have a message for anyone thinking of travelling there this holiday weekend: “don’t.”

The trouble is, Norfolk only has six bylaw officers who patrol 1,700 square kilometres. The OPP has refused to help ticket cottages. With resources so scarce, no one has actually been fined yet, despite the fact that tourists have already been flocking into Port Dover.

Chopp called it “a slap in the face” to the locals and to those who can’t go on vacation during this crisis. Across the country, communities are trying to navigate the complications of an influx of people retreating to cottages and cabins or being unable to.

In Quebec, police are conducting random stops of cars with Ontario licence plates and turning some cars back. In New Brunswick, locals are anticipating a drop in revenue because American cottagers cannot cross the border into Canada. And in Haida Gwaii, B.C., non-residents who arrive by ferry are being turned away — a move that came only after tourists continuously ignored the Haida Nation’s ban on visitors.

But for those who live in cottage country full-time, remaining vigilant has not kept out the tourists yet. In Port Dover, Barron wipes down her groceries, crosses her fingers, and waits for the visitors to pack up and leave.

Quebec government to spend $19M on recruiting, training IT professionals