Thinking of coming down with something the day after your Super Bowl party? The boss may have seen that move before, new survey results suggest.

An online survey of 1,014 randomly selected full- and part-time Canadian office workers found that 37 per cent know someone who has skipped work the day after a major sporting event such as the Super Bowl, a five per cent increase over a similar survey conducted in 2016.

In a separate survey of senior managers, 46 per cent said calling in sick or making an excuse for skipping work the next day is “the most distracting or annoying employee behaviour when it comes to major sporting events.”

That’s a 24 per cent increase from a similar poll conducted in 2017.

Both new surveys were conducted on behalf of OfficeTeam, an employment agency that specializes in temporary placement of office workers.

Koula Vasilopoulos, Canadian district director for OfficeTeam, said the surveys didn’t delve into why sports related absenteeism may be rising. But she said she hopes the findings prompt businesses to be proactive about preventing a rash of sick calls the morning after a big game.

If there’s a lot of fans in the office, managers could send out notes reminding people to book a vacation day in advance if necessary, said Vasilopoulos, who resides in Calgary. “It’s the unplanned absences that you want to try to prevent.”

In certain cases, it may be possible to allow some employees to work remotely so they can apply a bit of saved commute time to sleeping a little later, or to be flexible about hours — starting at 10 a.m. instead of 9 a.m., for example.

A win for employee morale

There’s also an opportunity to leverage all that football (or hockey, or baseball) enthusiasm for good, said Vasilopoulos.

In focusing on employee engagement and retention, she said, many companies are “taking advantage of these events by creating some kind of internal event around it — a team competition, letting people dress up in their jerseys, different types of things.”

A sports theme could also be applied to a business objective, such as hitting a sales target.

Even something as simple as planning and announcing coffee and snacks for a post-Super Bowl morning meeting can go along way to getting revellers in the door and boosting morale, said Vasilopoulos.

These small gestures can help cultivate employee loyalty — something she said has “100 per cent” become more critical given the low unemployment labour market.

“When people are happy, they generally perform at a very good level,” she said. “When it comes to employee retention, it’s really important to think about things that allow people to continue to get work done but in a way that’s creating some happiness.”

“We’re well aware that people have interests and passions outside of work here, so we try to embrace them as much as we can,” said Zujew. If the sporting event takes place during work hours, such as when the Blue Jays were in the playoffs, or when the World Cup is on, the company broadcasts the games on its TV screens so people don’t feel like they have to sneak out to watch.

Instead, staff can take laptops to the lunchroom where they can watch on a big screen while still getting some work done. The company will put playoff Raptors’ games on in the evening and staff will stick around to watch those together as well. 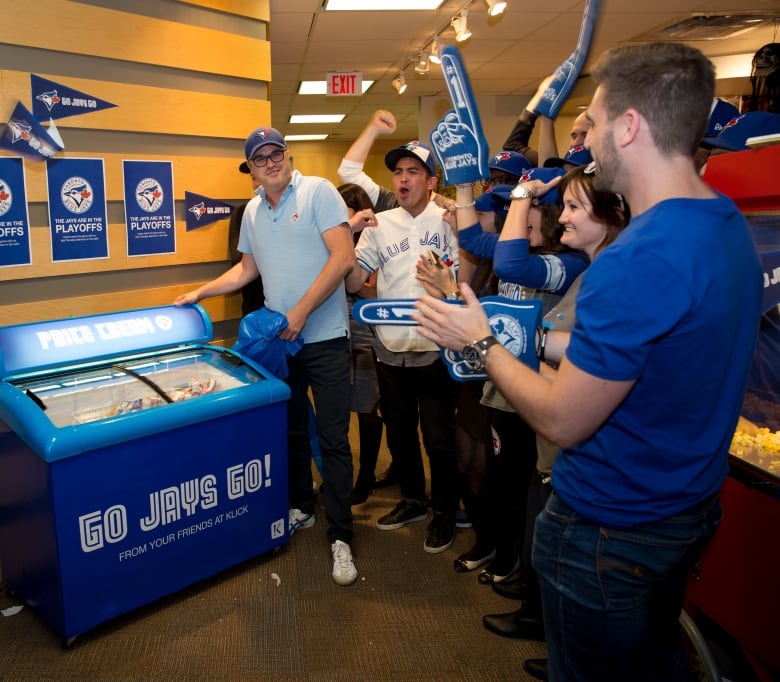 Glenn Zujew, executive vice-president at Klick Inc., (left) unveils the company’s madeover ice cream freezer, the ‘Price cream freezer’ a few years ago when the Toronto Blue Jays had acquired pitcher David Price and had made it to the ALDS playoffs. Some staffers volunteered to eat a ‘Price Cream Sandwich’ every time Price got a strike out, says Zujew.

Although Klick managers can’t do the same for the Super Bowl because it happens on a Sunday each year, Zujew said he believes the overall culture of the office motivates staff to show up in the morning.

“When they’re tired the next day after watching the Super Bowl, we want them to feel like they’re coming into a place where they can have some fun, they can learn here, they feel connected to the work, and excited about seeing their friends to talk about the game,” he said.

“People who like each other and work well together and have fun together are going to create your loyal, most engaged employees and they end up, in turn, creating some of the best work.”