It started as a parking lot.

Then came the swooping aluminum supports with durable, white material wrapped over them.

Almost overnight, the painted lines were covered up and the pavement outside Joseph Brant Hospital began its transformation into a pandemic response unit.

“Every day counts,” said Mark Watts, president of BLT Construction, the company tasked with erecting the structure and keeping up with the critical countdown. “Every day means lives.”

Dr. Ian Preyra, chief of staff at the Burlington hospital, believes a “remarkable surge” in patients is coming.

That’s why the hospital announced Monday it plans to spend more than $2 million putting up the temporary 93-bed facility.

The pandemic unit will house patients with mild to moderate symptoms of COVID-19 who would otherwise overwhelm hospital resources over the next two weeks.

“We are essentially creating surge capacity based on the worst-case scenario,” Preyra explained. “It would be a blessing if we didn’t have to use this space.”

For BLT, the race began in Calgary where Sprung Structures loaded trucks with the crates and bundles that made up a rush shipment of the different parts needed to assemble a hospital.

The technical name for the type of building that’s going up is a “tensile membrane structure,” he patiently pointed out — not a tent.

“For a hospital environment it’s graded for snow loads, high wind speeds, hurricanes,” he listed off. “So it’s a safe building to be erecting for this type of application.” 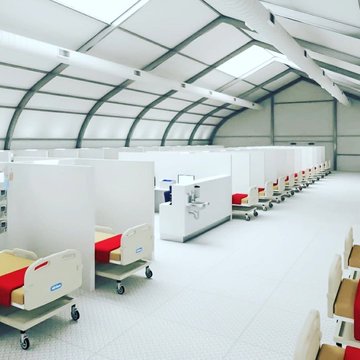 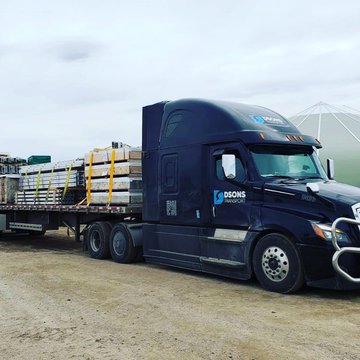 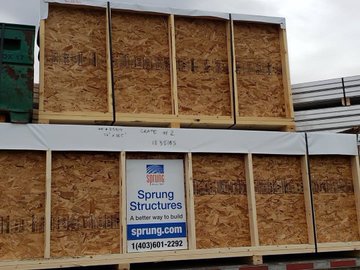 331 people are talking about this

The pieces began arriving in Burlington from the cross country trip this week and immediately started going up thanks to the BLT team and a small army of subcontractors.

The main bulk of the structure is already in place just days after the announcement. A tunnel will lead to the hospital’s south tower where elevators can carry people up to intensive care if they need even more support.

The unit will be staffed by family physicians kitted out in personal protective equipment — a factor Preyra said will free up resources within the hospital and ensure patients can follow up with someone familiar with their case once they’re discharged.

“We’re working like 24/7 on it to meet the timeline. It’s definitely expedited,” said Watts. “The pandemic and the peak, the curve and when these hospitals are requiring these beds, it’s immediate. Every day to us is important.”

A project of this kind also comes with challenges.

“We’re treating it as an infectious disease centre and that has complications with mechanical systems,” he explained, adding the consulting team from Joseph Brant has been crucial when it comes to “pioneering” the effort.

One of the most difficult aspects was finding the beds, oxygen machines and ventilators to help patients hold on as they fight the virus.

The build is the first time BLT has put up a temporary hospital, but Watts figures it won’t be the last.

His phone has been “lighting up like a Christmas tree,” with interest from other parts of Ontario, Alberta and Quebec.

Gearing up for ‘sustained pressure’

Preyra works as an emergency physician and said staff at the hospital are already seeing an increase in patients presenting with respiratory symptoms consistent with the new coronavirus.

Five COVID-19 patients were in the intensive care unit as of Wednesday, nine others who are suspected of having the virus were being cared for elsewhere in the hospital and two patients who had recovered enough had been sent home.

But Preyra said he expects those cases are just the beginning.

The doctor anticipates “sustained pressure on the system” and said his team is preparing for a trajectory that compares to places like Italy or New York City.

“This is something very different,” said Preyra. “I think this will be a generational event for physicians in Canada and across the world and I don’t think it’s comparable to anything we have yet experienced.”

Other area hospitals are working to free up beds too. St. Joseph’s Healthcare Hamilton and Hamilton Health Sciences (HHS) have both cut back on elective surgeries and discharged patients whenever possible.

Both, however, declined to be specific about what any new surge spaces would look like or where they would be located.

St. Joe’s says it’s designing COVID-19-specific units within the hospital and “non-traditional spaces” outside of the hospital setting, without explaining what that means or would look like.

It’s been an “enormous task” but staff have opened up 200 beds so far.

“Everything is on the table” at HHS including using non-patient parts of hospitals and unspecified community locations as a last resort, according to a spokesperson who said they’ve found 350 beds that can be dedicated to those with COVID-19.

On Twitter Joseph Brant said it’s the first Ontario hospital to go public with its plans for expanding capacity.

Even if the anticipated surge doesn’t materialize, Preyra said he’ll have no regrets.

“I think the greatest praise we could receive after all this is all said and done is that Joseph Brant Hospital was over prepared,” he said. “I would be delighted with that.”