The mother of former Bloc Québécois leader Gilles Duceppe was found dead of hypothermia outside a Montreal seniors’ residence on Sunday.

Hélène Rowley Hotte, 93, was locked out of the Lux Gouverneur, a luxury seniors’ residence in the city’s east end, after an alarm was triggered at 4:15 a.m.

At that time, it was –19 C outside with the wind chill making it feel like –32 as a severe winter storm was bearing down on the city.

Rowley Hotte’s identity was confirmed to Radio-Canada by a family member.

Her body was discovered in the snow just outside the building more than seven hours after the alarm went off, police said.

According to the Montreal fire department, about 100 people were forced to leave the residence when carbon monoxide was detected. They were allowed back into the building by 6:20 a.m.

A call was made to 911 at 11:45 a.m. to report the body and, after the initial investigation, police said it appears that Rowley Hotte heard the alarm but didn’t hear the audio announcement saying that her building — one of three in the seniors’ housing complex — was not being evacuated. 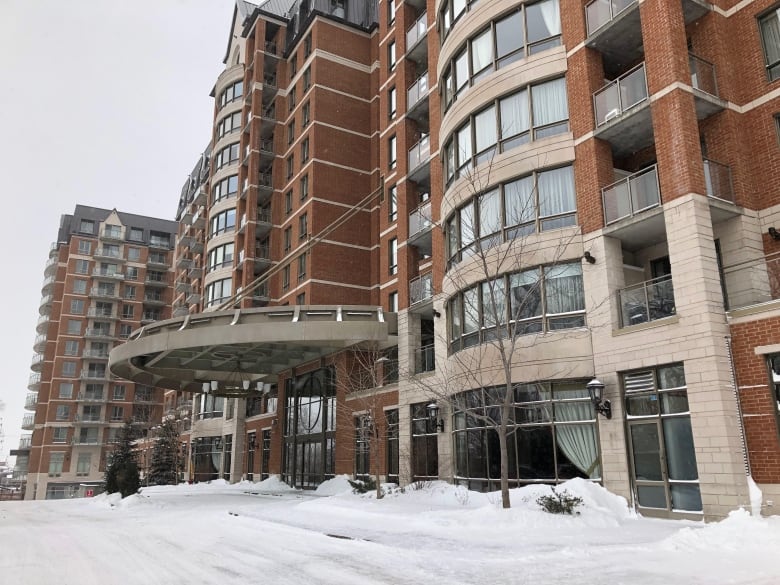 The woman’s body was found in the snow just outside the Lux Gouverneur seniors’ residence. (Valeria Cori-Manocchio/CBC)

Rowley Hotte left the building through a back door, which locked behind her and trapped her outside, police said.

Police could not confirm what she was wearing when she died.

Police said the death is not a criminal case and will be handled by the coroner’s office.

Coroner Géhane Kamel is investigating, collaborating with police to determine the cause and circumstances of her death, said Joannie Lambert-Roy, spokesperson for the Quebec coroner’s office.

Duceppe, a longtime politician, was the leader of the sovereignist Bloc Québécois for 15 years in three separate stints. He declined to comment Monday.

The Bloc Québécois tweeted Monday, offering “our deepest condolences to Gilles Duceppe and his family. Wholeheartedly with you through this ordeal.”

Blais said she is looking into the death and is scheduled to hold a news conference Monday afternoon.

The Lux Gouverneur seniors’ residence is a private luxury apartment complex that offers an array of services, according to its website.

Those services include a 300-seat theatre, on-site spa, aquatic centre and beauty salon. There is a pharmacy, chapel, gardens, wine cellar and library, among the many amenities offered.

The website also touts the site’s security, including a 24-hour concierge, video surveillance, an emergency call system and electronic chip cards to access apartments and buildings.