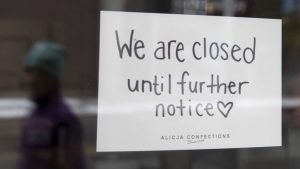 A sign on a shop window indicates the store is closed in Ottawa, Monday March 23, 2020. Prime Minister Justin Trudeau said today the federal government’s emergency wage-subsidy program will be extended to December.

The program covers 75 per cent of wages, up to a weekly maximum of $847, for workers at eligible companies and non-profits affected by the economic slowdown caused by the COVID-19 pandemic.

“This week we’ll be announcing an extension to the wage subsidy program until December, to give greater certainty and support to businesses as we restart the economy,” said Trudeau.

The program is the centrepiece of the government’s plan to get Canadians back to work following several months of restricted economic activity — but the program’s uptake has not been as robust as the government had hoped.

The government’s fiscal and economic “snapshot” last week boosted the budget of the wage subsidy program to $82.3 billion.

Trudeau wasn’t saying today how the government will reshape the eligibility rules for the program — rules which critics have claimed act as a barrier to receiving the aid.