Provinces are cautiously beginning to allow businesses and services to reopen from their pandemic lockdowns, but the Canada-U.S. border will remain closed for at least another 30 days. 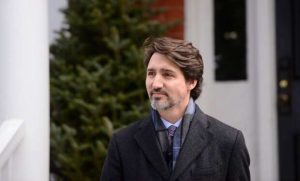 Both countries reached an agreement in March to temporarily close the border to non-essential travel — meaning no recreational visits — while keeping it open to commercial traffic and essential workers who cross for work.

That agreement was extended in April by 30 days and it was set to expire on May 21.

Trudeau said the provinces expressed a “clear desire” to keep the border closed because of the threat of COVID-19 cases moving north. He said the Americans were “completely open” to extending the closure.

Asked when Canada might reopen to international visitors, Trudeau said the government is making decisions week-to-week based on a rapidly changing situation.

“Every step, we have to make the right decisions based on the circumstances,” he said.

Trudeau said that even after travel restrictions are eased up, strong measures must be in place to limit the spread of the virus and to ensure visitors don’t become vectors for the spread of COVID-19.

Canada’s Chief Public Health Officer Dr. Theresa Tam said that as public health measures are gradually lifted, it will be extremely important for health officials to detect and clamp down on new cases to ensure the health care system isn’t overwhelmed. She said efforts to manage the spread of the virus have been assisted by the reduction in the number of international travellers coming to Canada.

“If there is increased volume, we want to make sure that we have the safety of Canadians top of mind. So we want to make sure we not only keep up but also strengthen some of those measures,” she said, adding that the mandatory 14-day quarantine for arrivals remains a “cornerstone” of federal pandemic policy going forward.

Because economic recovery will require virus testing with rapid and accurate responses and minimal quarantine requirements, he said, governments will prioritize tests for their own citizens first and foreigners second.

“If millions of people cross the border, those millions of tests should be used to ensure the domestic situation is secure first. That type of volume is still months away and, therefore, so is the border opening,” he said.

“This pandemic is the ultimate economics tradeoff: epidemiology versus the economy. Focus on one excessively and it damages the other. For now, the focus has been on the former. We have now reached a point where politicians are turning toward the latter, but not enough that they will risk domestic health for the benefits of access to the foreign economy.”

Trudeau also announced today the government is expanding the eligibility rules for the interest-free loan program for small businesses, giving businesses without payrolls access to government-backed loans of up to $40,000 each.

A quarter of the loan is forgivable.

Changes to the Canada emergency business account (CEBA) mean the program is now available to:

Applicants that have a payroll of less than $20,000 need a business operating account at a financial institution, a Canada Revenue Agency business number and a 2018 or 2018 tax return to apply.

They must also have non-deferrable expenses — such as rent, property taxes, utilities and insurance — of between $40,000 and $1.5 million.

The Canadian Federation of Independent Business (CFIB) said the announcement is good news for family businesses that pay themselves in dividends, for gyms and others that employ contractors, and for those that rent chairs, such as salons.

“It is critical that this expansion of the program be rolled out as quickly as possible, as the firms that were excluded have gone two months with little assistance and are now facing another rent deadline of June first,” CFIB said in a release.

“With many provinces now looking towards reopening their economies, small businesses will need ongoing support to get through the months ahead.”

CFIB has asked the government to boost the amount for the loans, as well as the portion that’s forgivable, because many businesses face a long recovery period.

The Canadian Chamber of Commerce said the announcement addresses its criticism of the previous eligibility rules — that they discriminated against some with different business structures, such as entrepreneurs that take income directly from their firms. But it said the requirement for firms to have a business account will disqualify many small firms that don’t have a separate account for their business.

In Ottawa for a press conference today, Conservative Leader Andrew Scheer said again that it’s time for Parliament to reopen as well.

He renewed his push for a scaled-down contingent of MPs to return to Ottawa on May 25, consistent with public health guidance on physical distancing.

Calling Parliament an essential service, Scheer accused Trudeau of using the global health crisis to dodge transparency and accountability as his government spends billions of dollars.

“The government must not be allowed to hide things from Canadians,” he said.

Provinces are taking more steps this week to reopen their economies.

In B.C., restaurants are now allowed to open dining rooms as long as they follow safety protocols such as providing disposable menus and maintaining distancing measures.

In Saskatchewan, stores, hairstylists and massage therapists are allowed to open under space and hygiene rules.

But Premier Doug Ford announced today that schools will remain closed for the remainder of the school year.